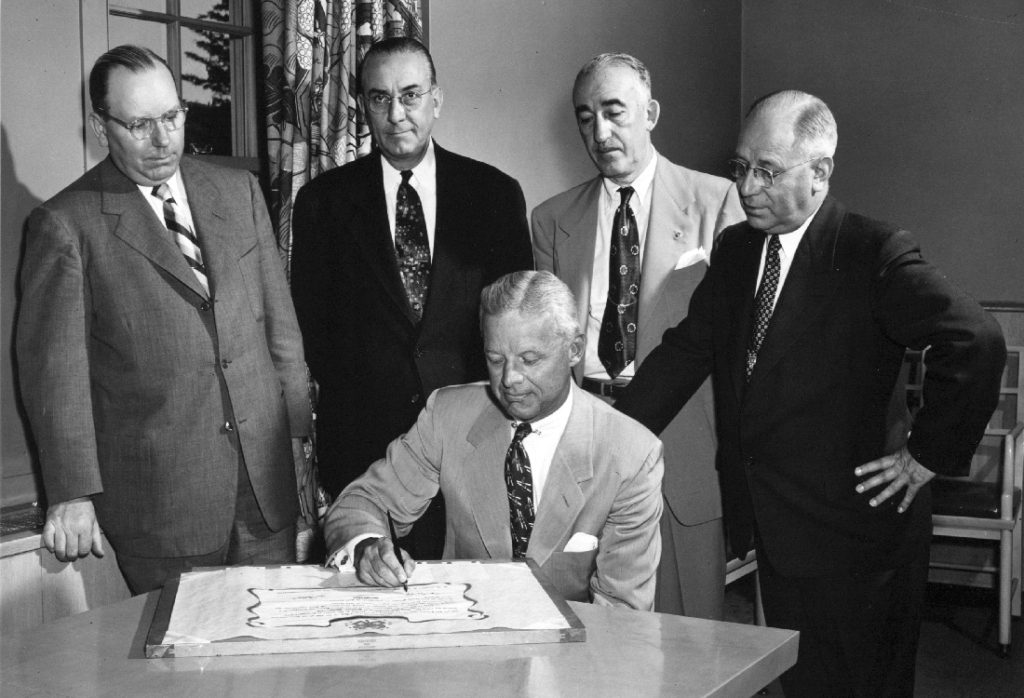 George A. Haggarty, Detroit attorney and first president of the Michigan 4-H Foundation, signs the scroll on May 27, 1952, as other incorporators look on. They are (L to R): Joseph C. Cahill, Detroit Edison Company; Milon Grinnell, editor of Michigan Farmer and vice president of the foundation; H.J. Gallagher, Consumers Power Company; and Arne G. Kettunen, state 4-H club leader and secretary of the foundation. Joseph H. Alexanian was the sixth incorporator (not pictured)

In 1951, business and educational leaders gathered to explore the need for an organization “to help procure financial aid for the needs of an expanded 4-H program,” as stated in the minutes of the Sept. 22, 1951, meeting of the Friends of 4-H. The committee met again in February 1952 to establish the articles of incorporation and bylaws for the Michigan 4-H Foundation. The articles were filed on April 25, 1952.

On May 27, 1952, the first meeting of the Michigan 4-H Foundation featured a ceremonial signing of the “Founders Scroll” by the six incorporators and charter members. The six incorporators were Joseph H. Alexanian, Joseph C. Cahill, H.J. Gallagher, Milon Grinnell, George A. Haggerty and Arne G. Kettunen. The first 15 trustees and officers were subsequently elected to the board of trustees.

Seven decades years later, the Michigan 4-H Foundation is a $11.75 million 501(c)(3) fundraising organization led by a 21-member board of trustees.

1952-1969
After four years of existence, in 1956 the board launches the Camp Kett Campaign, its first major fundraising campaign. By 1957, the foundation acquires nearly 140 acres of property with frontage on Center Lake in Osceola County for the construction of Camp Kett. A cornerstone ceremony is held Sept. 17, 1960 to dedicate the camp in honor of Arne G. Kettunen, who died in 1959. In 1961, Camp Kett opens as the nation’s first 4-H conference center.

1970-1979
In 1972, Camp Kett is renamed Kettunen Center. The Detroit 4-H Center also opens that year launching a major Michigan 4-H urban programming initiative. The 4-H Proud Equestrians Program – therapeutic horseback riding – begins in 1974. By 1977, the Kettunen Center Improvement Project is launched to update facilities. And, in 1979, the 4-H Mainstreaming Project is funded with major grants from the C.S. Mott and W.K. Kellogg foundations – the largest grant to a state 4-H program at the time.

1980-1989
In 1980, an earth-sheltered home is constructed at Kettunen Center as the residence for the Kettunen Center director. By 1984, the Michigan 4-H Foundation begins to help county 4-H programs establish funds. 1987 marked the gift of Tollgate Center to MSU for use as a 4-H education center is supported by an additional grant from the Americana Foundation to the Michigan 4-H Foundation. In 1988, the W.K. Kellogg Foundation grants $2.16 million to fund the “SPACES: Preparing Kids for a High-Tech and Global Future” initiative for early adolescent development.This same year Kettunen Center begins offering 4-H environmental and outdoor education programs (formerly called 4-H TRACKERS).

1990-1999
The Michigan 4-H Children’s Garden opens in 1993 on the campus of Michigan State University as the first youth-focused garden located on a university campus. In 1994, Vision 2021: Campaign for Kettunen Center is launched. This $2.5 million campaign improved facilities (including the Red Oak wing addition and the Mawby Learning Center), grounds and 4-H environmental programs. The Polish Connections project is initiated in 1995, resulting in 4-H programs in Poland and the Michigan 4-H Foundation becoming the fund development model for the creation of the Polish 4-H Foundation. In 1998, the Michigan 4-H Youth Conservation Council is established.

2000-2009
The Campaign for 4-H is launched July 1, 2000. The campaign, which concluded in 2007, raised over $10 million, exceeding previous capital campaign totals by more than $7 million. In 2001, the Herbert H. and Grace A. Dow Foundation funds the Dow Connected Gardens Project. The Alice Mahoney estate gift for the 4-H Children’s Garden is also the largest estate gift to date that year. In 2002, Michigan opens the national 4-H centennial year with the Michigan Conversation on Youth Development. Celebration events took place throughout the year and included a family reunion, gala, tailgate and the induction of the inaugural class of the 4-H Emerald Clover Society. In 2003, the Indoor Michigan 4-H Children’s Garden opens, providing year-round educational access to science-based learning. Beginning in 2006 several groups launch campaigns to establish endowments for Michigan 4-H. They include the the funds for 4-H international programs, Michigan Farm Bureau 4-H Excellence in Agriculture, Michigan 4-H volunteer recognition and the multi-focused fund created by the Michigan Division of the Woman’s National Farm & Garden Association (WNF&GA). In 2008, the Pete and Sally Smith Schoolyard Demonstration Garden opens. This 2,500-square-foot addition to the outdoor Michigan 4-H Children’s Garden offers ideas for creating gardens in small spaces. In 2008, Kettunen Center is certified as a Green Lodging Michigan Partner by the Michigan Department of Energy, Labor and Economic Growth and in 2009, upgraded to a Green Lodging Michigan Steward.