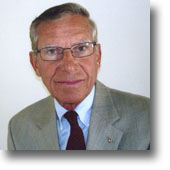 4-H has helped me to learn skills to last a lifetime. I learned how to work with others to accomplish desired goals and the importance of integrity.

Ted Leipprandt worked at Cooperative Elevator Company in Pigeon from 1959 until he retired in 1995. For 13 of those years Leipprandt was CEO of the company. He received his bachelors from Michigan State University in 1955 and served in the U.S. Army Artillery unit from 1955 to 1957. He also worked briefly for Macomb County MSU Extension. Leipprandt presently helps his son and daughter-in-law with apple production at Leipprandts orchard. In 2006, he participated in the National Immunization Days in India for the eradication of Polio. Leipprandt served as Michigan 4-H Foundation trustee for 13 years, two years as president, DTE Energy trustee for 14 years and a 4-H leader in Huron County for 12 years. He has been a Pigeon Rotary Club member since 1964 and served as its district governor from 1991 to 1992. He is also a former member of the Michigan Bean Shippers Association, East Central Farm Credit System board and the Michigan Agricultural Dealers. He is a member of the Salem United Methodist Church of Pigeon and has been an adult Sunday school teacher for many years. He received 1986 Michigan Farmer Businessman of the Year, the 1986 MSU College of Agriculture and Natural Resources Distinguished Service Award, the 1990 Michigan 4-H Alumni Award and was honored in 1995 for his role in Michigans agricultural sector by the Michigan Bean Shippers Association. In the last three years Leipprandt has been on two mission trips to Guatemala, and one to Mississippi with his church mission team. He has found each of these trips most rewarding.