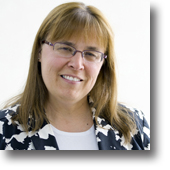 4-H projects taught me many valuable lessons that I have used throughout my professional career. I learned the importance of preparation and practice, how to problem solve, how to win and lose gracefully, to work for long-term goals rather than short-term gratification, and to step up and perform when required.

Jamie Clover Adams was born and raised on a Berlin Township farm in Saranac, Mich. She was an Ionia County 4-H member from 1972-1982 involved with 4-H cooking, sewing and livestock (beef and sheep) projects. She earned her bachelors degree from the University of Michigan and has a masters degree in Public Policy from Georgetown University. Clover Adams was appointed director of the Michigan Department of Agriculture and Rural Development (MDARD) by Gov. Rick Snyder in July 2012. Prior to becoming director, she worked in various governmental leadership roles for nearly 25 years in two state capitols, as well as our nations capital. She has served in both the legislative and executive branches and several business trade associations covering a broad range of issues. Clover Adams most recently served as Director of Policy for the State of Michigans Quality of Life Group. She has held several leadership roles in the Michigan Senate and served as Secretary of the Kansas Department of Agriculture from 1999-2003. Additionally, she has worked for the Kansas Grain and Feed Association and the U.S. Chamber of Commerce. Clover Adams has served as president of the Midwest Association of State Departments of Agriculture (MASDA) and on the National Association of State Departments of Agriculture (NASDA) Board of Directors. Additionally, she has served as Clinton County Commissioner, District 6, MSU District 8 Extension Council, is a member of the Catholic Community of St. Jude and a member of the Red Cedar Gymnastics Booster Club.