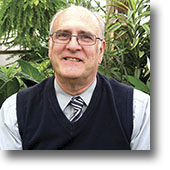 “Without the 4-H opportunities I have experienced, I would not be released to follow my life passion – touching the learning pallet of students! Because of my learning disabilities, 4-H gave me the confidence to succeed with my passions and interest. Whether showing poultry, horses, dairy cattle or entomology projects, I was released to the fact that I could be successful and learn by experiencing!”

Koppelman is a fifth grade teacher at Blissfield Elementary School where he is actively involved in science education and education reform in Michigan. He has been teaching for 43 years and is the program director for Blissfield Outdoor Education and Deerfield Public School Outdoor Program. He created the Blissfield Environmental Life Lab (BELL) which is a climatically-controlled greenhouse with a variety of biomes where students in the Blissfield School District can experience and explore science. In 2013, he received the Shell Science Teaching Award sponsored by the Shell Oil Co. and managed by the National Science Teachers Association. This award, given to only one teacher in the country annually, included a $10,000 prize, which he used to invest in the lives of others and people in need. Since then, Koppelman has been inducted into the National Teachers Hall of Fame and was one of the two finalists in Michigan for the Presidential Award for Math and Science. Additionally, he is an active member for the National Science Teachers Association and both the National and Michigan Education Association. He received both his bachelor’s and master’s degrees in elementary education from Eastern Michigan University.

He has served on the Monroe County 4-H Council for the past 35 years as vice president and president. During that time, he held many leadership positions and obtained numerous awards throughout Monroe County 4-H, including the Monroe County 4-H Alumnus Award, Meritorious Service Award, Leadership Award and Investment in American Youth Award. Koppelman is an active member of the New Life Church, which he helped to establish and build. He is also a counselor for Redeeming Africa’s Hope and Haiti Habitat Restoration/Education Consultant in hopes of starting environmental friendly projects and education programs.