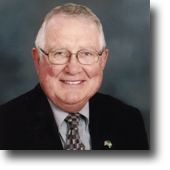 My deep interests are working and helping people (adults and youth) which were started in 4-H. This included seeking new ideas, challenges and encouraging each person to develop to their greatest potential. I have been lucky to have been surrounded by good people throughout all of my life.

William Bortel served three years as the Livingston County 4-H agent and ten years in Gratiot County as the agriculture and 4-H agent before becoming the Tuscola County MSU Extension director. He initiated and coordinated the first two Agricultural Expos held in Tuscola County in 1976 and 1977 which continue at Michigan State University today. Bortel was then named coordinator of the Michigan Animal Revitalization Initiative which generated $76 million for MSU animal agriculture research. He also conducted and coordinated more than 30 agricultural education tours across the U.S. and in 40 countries. Bortel most recently served as director and executive secretary of the Monitor Sugar Beet Growers where he lobbied for several agriculture and sugar industry-related bills in Washington, D.C. Bortel was selected as a participant in the Quest for Quality Kellogg Study Program and served in the U.S. military. He has served as president of the Caro Rotary Club and Ithaca Jaycees and chaired both the Caro United Methodist Church administrative board and finance board. He is a member of the Ithaca Toastmasters, the Tuscola Economic Development Corporation and served as past chair of the Caro Village Planning Commission. He was elected to the Caro Village Charter Commission as director to form a city charter. Bortel has been honored with the Michigan Agriculture Educator of the Year Award from Michigan Farmer Magazine.