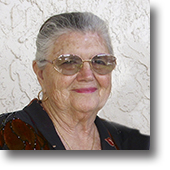 Most rewarding are all of the lasting friendships I have made over
the years. And of course, seeing all of the former 4-H members form
clubs of their own or become co-leaders with me.

A 4-H volunteer leader of Shiawassee Countys Rangers 4-H Club since 1960, Joan Spindler has devoted her life to educating youth and horses. With her leadership, encouragement and teaching, the youth in her club have been guided to not only win awards in the show ring, but to lead successful lives in the agriculture field and many other professions. Spindler excels in developing youth for the future, promoting citizenship and community service and to that end has worked to groom members for leadership positions. Five previous members have returned as Rangers co-leaders and four have gone on to start their own 4-H clubs. Additionally, club members learn horse science, horsemanship and sportsmanship skills. Spindler also promotes statewide 4-H educational opportunities: 4-H Exploration Days, Kettunen Center workshops and state 4-H horse events to the members of her club. They host a horse show fundraiser and organize memorial trail rides to honor a former club member and leader who passed in 2006. Spindler was also awarded the Michigan Horse Council Catalyst Award earlier this year for her service to 4-H and the Marion Rigoulot Award in 2001  an award given to a Shiawassee County 4-H leader who goes above and beyond the call of duty. Spindler and her husband John have four childrenJanet,Jeri, Jennifer and Johnand raise, train and race Standardbred horses in Michigan and Florida. Joan also enjoys flower gardening and is a member of the Owosso Garden Club.