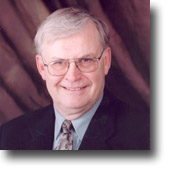 As a 4-H member I learned the importance of undertaking a project, completing the project and the rewards of putting forth your best efforts. 4-H taught me not only to work as an individual, but the importance of working as a team. It gave me the opportunity to make many lasting friendships.

Wayne Wood, a former Sanilac County 4-Her and fourth-generation dairy farmer, is in his second year as the 16th president of the Michigan Farm Bureau. Wood has served on the Michigan Farm Bureau board of directors since 1984 and was vice-president for 12 years before being elected president. Wood has served and chaired several Farm Bureau committees, including the policy development committee, which recommends state and national policies. Before being elected to the state board, Wood was president of the Sanilac County Farm Bureau and later District 6 director, representing Huron, Tuscola, Sanilac, Lapeer, St. Clair and Macomb Counties. Wood has also served his community as township supervisor for 16 years, chairman of the Sanilac County United Way, cochair for the Sanilac County Economic Development, 21 years on the Sanilac Mental Health Board (six as chair), a lay leader for MSU Extension, and as chairman for FOCUS 2000. He is currently a member of the Extension Advisory Council and the chairman of the Agriculture Preservation Fund Board. Wood is also partner (with his wife, Diane, his brother, Randy, and his son, Mark) of a 1,200-acre family farm that produces corn and alfalfa, and milks 300 head of dairy cattle. He was the dairy fair superintendent for 10 years and a 4-H dairy leader for eight years.