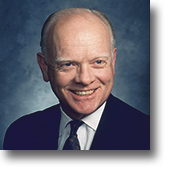 “4-H in the ‘60s was fun and the competition was friendly. I made lots of friends from all over the county and state. I also made friends in many other states when I attended the Washington, D.C. one-week session for qualifying 4-H’ers. 4-H is tremendous!”

W.G. (Mac) McPherson began his career as a financial advisor with Mass Mutual Financial in 1975. Today, Mac leads Team McPherson. This team of self-employed experts,  collaboratively advises very accomplished business owners, corporate executives and their organizations to plan, design and fund executive benefits, succession, exit strategies, wealth transfer and family legacy plans. Along with receiving many accolades, McPherson has trained as a Strategic Coach Multiplier, a five-year international coaching program offered to entrepreneurs in all industries. He has completed three levels from the Life Underwriter Training Council and has been certified as a Disability Income Master, an award bestowed to 125 of 5,000 Mass Mutual agents. McPherson also has served as president of the Grand Rapids Mass Mutual Agent’s Association and Grand Rapids Association of Life Underwriters. He has been a member of the National Association of Insurance and Financial Advisors since 1975, and a member and past board member of the West Michigan Estate Planning Council. Serving many roles, McPherson has also been an elected trustee for the Grand Rapids Community College, president of the Vergennes Township Cemetery Association, member of the Mason Grand Rapids Blue Lodge, part of the board of directors of the Michigan Centennial Farm Association, president of the Lowell Rotary Club and much more. McPherson is a Michigan State University (MSU) graduate who was active in the Senate of the State of Michigan as a senate aide and served as an aide to Senate Majority Leader Emil Lockwood in 1970. He has also been honored as an MSU Landon Society member for a deferred gift to the Michigan 4-H Foundation.

McPherson’s leadership began in Kent County 4-H where he served as vice president of the Kent County 4-H Youth Service Club, chaired the 4-H Youth Service Club food and beverage booth at the Kent County Fair and held various other 4-H club offices. As a 4-H member, he participated in dairy, horticulture, vegetable, field crops and demonstration projects. He raised dairy cows, receiving several grand champion awards at the county and 4-H state show. He was also the State 4-H Dairy Project Award runner-up. McPherson feels that his 4-H experiences were life changing, and they shaped his life vision to set the high expectations for himself that he still embodies today.