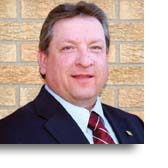 4-H gave me many opportunities that I never would have had. 4-H opened many different avenues for me to learn. I learned respect for people, integrity and it help to develop leadership skills. I believe that 4-H, my key leaders and my county 4-H agent shaped me into the successful person I am today. I owe so much to this 4-H program and these individuals.

Tod Kubiszak is a district sales manager for Agrigold Hybrids responsible for selling and distributing hybrid corn for 13 counties in southwest Michigan. He has been third in customer growth for Agrigold and winner of the incentive program since2009. Kubiszak has developed a special manual for selling silage hybrids for three seed companies and harvested and interpreted silage data for Agrigold in Michigan. He received crop advisor certification from the National Society of Agronomy in 2000 and served nearly a decade as a certified crop advisor for Northstar Agronomy Services and Barneys Produce, Inc. before obtaining his current position. He is a graduate of Kalamazoo Valley Community College majoring in agricultural science and economics. Additionally, he owns and operates a show pig operation, Redline Genetics. Kubiszak has served as Van Buren County Farm Bureau president for six years and advocates farm bills to legislators. He is also Van Buren County Junior Livestock Producers past president, served as the Van Buren County Youth Fair assistant beef superintendent and helped plan and organize the Blossomtime Festival Queens Farm Tour in Berrien, St. Joseph and Van Buren counties. Kubiszak serves on the Van Buren County FFA Advisory Council and has been a Van Buren County 4-H volunteer leader for 25 years, serving a key leader for the Lucky Clovers 4-H Club since 2002. He created and advocated for a successful Young Farmer Program in Van Buren County, created and organized the Farm Bureau awards program for livestock educational project books and has fundraised for multiple improvements at the local fairgrounds. Kubiszak has received the Farm Bureau Gold Star Award in communications, farmers care, county issues, member involvement and policy department for his leadership in each category.