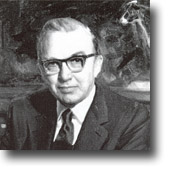 I joined 4-H in 1928 and founded an older 4-H service club in Northern Michigan in 1936 [whose work] led to the legislature approving permanent camp buildings at Camp Shaw in 1938!

For more than 58 years, William D. Knox has been a national voice on agricultural economics and dairy issues. As president of W.D. Hoard & Sons Company of Fort Atkinson, Wisconsin, he publishes Hoards Dairyman magazine and the Daily Jefferson County Union newspaper, and manages Hoards Dairyman Farm and DCI Marketing, Inc. Through his editorial leadership, Knox was an advisor to the Eisenhower, Kennedy, Nixon, Ford and Carter administrations on issues ranging from brucellosis eradication to economic stabilization and trade negotiations. He is founding chairman and has served as president and secretary of the National Brucellosis Committee. Knox has been as important to his local community as he has been to national and international affairs. He was president of the Fort Atkinson Board of Education for 10 years. He is a trustee of the University of Wisconsin-Madisons Research Park Development and a five-year member of UWMs Board of Visitors. He has served as president of the Agricultural Publishers Association, director of the Wisconsin Taxpayers Alliance and director of Premier Bank. He is recipient of 38 honors and awards for his service and leadership locally, nationally and internationally, including contributions to national 4-H and Michigan State University. In memoriam August 5, 2010.