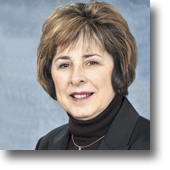 4-H provided me the opportunity to learn from my failures yet not be defined by them. 4-H opened up the state and the world to a farm girl, and honed my parliamentary skills as well as public speaking. 4-H showed me the effect of government on every citizen.We live in the best country on Earth. As a public servant today, I still have the goal to Make the best better!

State Senator Judy Emmons serves in Michigans 33rd Senate District, which includes Clinton, Ionia, Isabella, and Montcalm counties. She has served three terms in the Michigan House of Representatives where she served two years as majority vice-chair of the House Appropriations Committee, and two years as minority vice-chair of the Military Affairs, Veterans and Homeland Security Committee and also the Higher Education Committee. Senator Emmons continues to give back to her community. Growing up a member of the Fenwick 4-H Club, she has volunteered as a 4-H leader for 27 years. As a graduate of Central Montcalm Public Schools, she has served 12 years on the Central Montcalm Public Schools Board of Education, including six years as president of the board; four years on the Montcalm County Intermediate School District Board of Education; four years on the Central Montcalm Foundation Board of Directors; and as a member of the Montcalm Conservation District Board of Directors. Additionally, she was appointed by Gov. John Engler to serve on the Michigan Teacher Tenure Commission. An owner of a registered Holstein dairy farm for over three decades, Senator Emmons is a life-long member of the Michigan Holstein Association and the Holstein Association of America and serves as a member of the Michigan Farm Bureau and on the Michigan Farm Bureau Board of Directors.