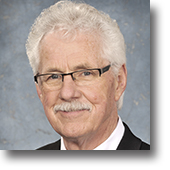 “4-H taught me the importance of developing individually and as a team. Our club focus was in woodworking. We would each make projects individually, and then once a year as a club, we would display them in the high school gym. Striving to do my best as an individual to contribute to the team has served me well during my lifetime.”

As the 35th District’s state senator, Darwin Booher has influenced the Michigan Legislature for over 20 years, first as a state representative and now as state senator. Under Booher’s leadership, timber harvest has increased within the state and regulations on access and use of state lands have improved. Booher’s passion for the Great Lakes is evident in his time spent as chair of the Great Lakes Legislative Caucus regarding key issues about Michigan’s lakes. His appointment as a Freedom Force to Russia member led him to explore mutual opportunities between the two nations. During the past 13 years of his legislative service, Booher has sponsored 233 bills and to date, 65 have become law. Prior to Booher’s legislative position, he worked at his local bank for 40 years, rising to become vice president.

As an Osceola County 4-H member from 1952 to 1957, Booher exhibited many animal and still-exhibit projects, although his passion lied in woodworking. He continues to complete woodworking projects for his family and friends while owning and operating the family farm as the seventh generation with his son and grandchildren. Darwin and his wife, Jan, raised their four children in 4-H to provide the same lifelong lessons that have served him throughout his lifetime. Although his time as a 4-H member is over, he continues to give back to the program by purchasing animals at 4-H auctions, attending fairs and participating in 4-H banquets.