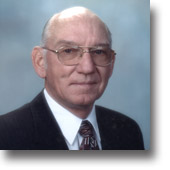 I remember my involvement in 4-H as being fun, and a great learning experience. However, I didnt fully appreciate those experiences until later in life. They helped me to mold my life and be successful in my career.

Wayne Adam, a lifelong resident of Sanilac County, resides on his familys centennial farm. In 2004 he retired as owner/manager of Agri-Business, Marlette Livestock Auction, Inc. He is a 1955 graduate of the Michigan State University Institute of Agricultural Technology program. Adams public service has included eight years on the Marlette Community Hospital Corporate board and seven years as a Marlette Community Hospital trustee. Adam served 25 years as the Lamotte Township clerk, 25 years on the Kingston State Bank Board and 15 years as a Marlette Chamber of Commerce member. He has been a member of Michigan Farm Bureau since 1963, as well as a member of the Sanilac County Farm Bureau, serving on several county committees. Adam was also a Sanilac County 4-H volunteer for 25 years, serving as a 4-H livestock committee member, 4-H livestock superintendent and 4-H swine superintendent. He also served in the U.S. Army from 1957 to 1959 and is a member of the Marlette Second Presbyterian Church. He is a donor to the Michigan 4-H Foundation, Michigan State University, (he became a member of the MSU Beaumont Tower Society in 2001) and the Marlette Community Hospital Foundation. He was recognized for his service with the 1969 MSU Ag Tech Alumni award, a 1978 Michigan Farm Radio Network Farmer of the Week award, and the 1990 Sanilac County Friend of 4-H award. In 2009, Adam became a Co-Chair of the Michigan 4-H Volunteer Recognition Endowment Fund. He is also a member of the MSU John A Hannah Society and the Marlette Regional Hospital Conerstone Society.