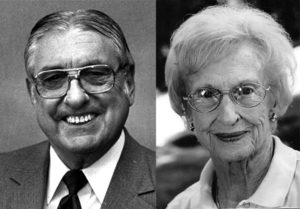 An estate gift from Roderick and Shirley Parsch will help sustain the work of the Michigan 4-H Foundation and its support for Michigan 4-H Youth Development.

Parsch was the CEO of Lapeer County Bank and Trust Company from 1956 to 1984. He continued to serve as board chair after his retirement in 1986. He served in World War II, receiving two Purple Hearts, the Silver Star and the Bronze Star. He was active
in several banking associations and served as president of the Independent Bankers Association of America. Additionally, he was active in many Lapeer organizations, including the hospital board and the St. Vincent DePaul Society. He graduated from the School of Banking, University of Wisconsin, and also served on the faculty of Ball State University.

The Parschs’ estate gift qualified them for membership in the Cornerstone Society and also the Founders Society, a new society recognizing donors of $10,000 or more to the Founders Fund Endowment or those who make an unrestricted planned gift that, when received, can be used to grow the foundation’s long-term reserve.

Planned gift donors are recognized as members of the A.G. Kettunen Society, established in 2007 to provide lifetime recognition to donors who have made documented future gifts to 4-H. It allows donors to share their wishes and the impact they would like to see their gifts make to benefit Michigan’s youth. A.G. Kettunen Society members receive a recognition certificate, permanent acknowledgement as legacy donors in the annual report, and, for gifts that exceed $25,000 at maturity, recognition as Cornerstone Society members.

The Michigan 4-H Foundation invites any donor considering a planned gift to contact the foundation at (517) 353-6692 to verify that the intent of the gift can be met.